How many times does the word rose appear in Tagore’s songs?

Offhand, I can only recall one solitary instance. Somehow, I thought the rose doesn’t grow in Tagore’s ‘Bengal’ very well. But it kind of gives you an angle, because as I was turning the pages of the recently published Rabindra Chitravali, savoring every mild gust of print-smell rushed up by the slow fanning pages of fine paper, I was struck by the contrast: the rose in various forms outnumbers any other flower when it comes to his paintings. 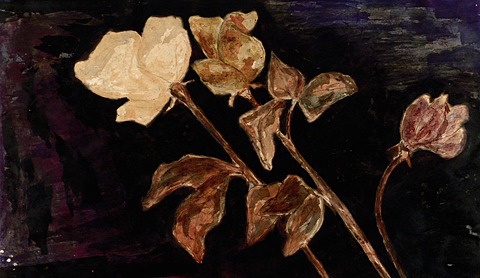 So rife are his songs with flowers, trees, little natural details & seasonal nuances of the nature of Bengal, that one is tempted to suggest that if geographic Bengal ever ceased to exist it could be recreated, piece by piece, flower by flower, as it were, from Tagore’s vast body of lyrics. One even suspects there was some kind of a Homeric figure at the center of Tagore’s lyrical universe, the Homeric figure of the poet as hero: the poet as the saviour of his race, much in the sense that Joyce later revived in his own unique way to recreate Dublin in Ulysses.

The poet was a hero because he rescued his race and its memories from oblivion, from non-existence, from ‘death’. He recorded and conserved in neatly crafted mnemonics everything around him – the flora, the fauna, the geology of elements, the various seasons and its nuances. One’s geography & racial memories play an important role here. That is why some words & ideas, which didn’t belong essentially to the world he was singing of (in this case, a certain ideal of Bengal the bard had in mind), found it difficult to be an essential part of his songwriting kit. Somehow, in that world the rose could never be a local flower like a palash, a shimul or a shiuli, however ubiquitous it may have become in Bengali gardens. It was forever a flower from across the seas, from the pages of European poets.

Or as Tagore would have preferred, from the pages of the poets of Shiraz. 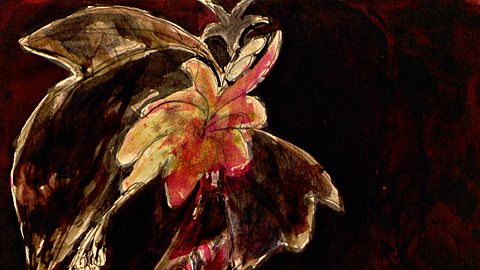 That is why it was all the more surprising to find so many roses among his paintings in the recently published 4 grand volumes of Rabindra Chitravali, the most definitive collection of artworks by Rabindranath Tagore. On the same note, one really couldn’t find any of the usual flowers that populate his body of songs. Another aspect is the depiction of trees, which are almost always merely ideas of trees in a generalized form rather than any particular species, while in his writings his landscapes throb with specificity and local character. This impels one to wonder how very different the two worlds are—the painterly & the lyrical—played out within vastly differing sets of aesthetic rules.

Getting to see so many of Rabindranath Tagore’s paintings (2000 odd) must be the most rewarding part of the experience of the 4 volumes of carefully designed and near-immaculately executed compilation, masterfully produced & edited by Professor R Siva Kumar of Kala Bhavan. What will initially put the reader of this collection at relative unease is the strange categorization of the paintings divided across the volumes: Landscapes, Flowers, Faces, Figures, Drawings, Illustrations, Doodles, etc. – which at first reads like a Borgesian joke, till it starts reeking of some sort of a compromise. But then I thought, perhaps there is a deeper authorial structure. 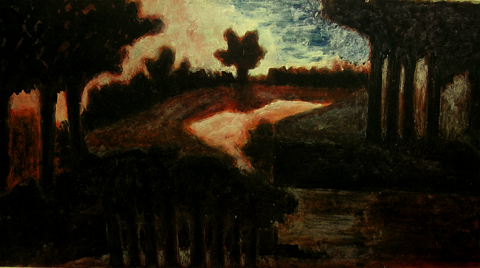 One usually expects a chronological layout where an element of time and linearity helps unfold the oeuvre in a narrative (or even investigative) manner, creating a sense of journey or discovery. It is possible, it occurred to me, that the editor wants to avoid this: such formats inevitably invite unwanted narrative strains to dominate the ‘readings’, and not without creating a sense of teleological foreshortening which distorts the scope of the oeuvre. A very basic example of this would be how in such linear readings Tagore’s early works—doodles & scribbles from as early as 1905—are always in danger of being judged in the light of what they seem to forecast, and the later works are seen as more complete products. In much the same way as drawings are often projected as auxiliary to the paintings they seem to appear to be the preparations of. Such readings are dangerous, as readings then start being based on notions of deviation – we know that such approaches can also be reversed completely, with equally disastrous results.

On other levels, the chronological approach can produce all kinds of authorial projections; which is okay and expected, but something the sheer scope of this book can ill-afford. I think Professor Siva Kumar is in favour of a more vertical reading of the works. Through this seemingly awkward categorization the editor manages to break the flow—chiefly, of time—and manages to present the works (relatively) undisturbed.

The introduction promises another companion volume to this collection (to be published) which will contain the editor’s overarching essay on the subject and I hope it will elucidate the choices behind this production in detail and explain the editor’s stance better. Looking forward.

Nice review. And the paintings. I might end up buying this book.