On the Shores of Pulp 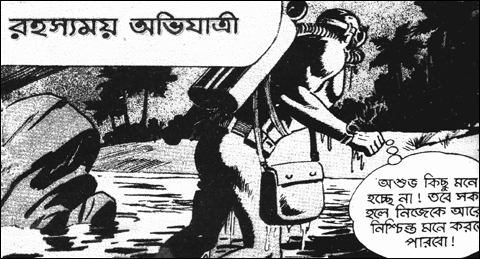 The cruel mechanism of taste lays waste to an unimaginable amount of human energy, relations, emotions; it also exhumes, retrieves, revives. We may already be in the middle of some kind of a process of revival*.

Narayan Debnath was a prolific artist, creating innumerable illustrations & book art for the ‘pulp’ industry in Kolkata. Over a period of half a century, he would also create a large body of adventure comics that would eventually be overshadowed by his more popular creations in the form of Handa-Bhonda, Nonte-Fonte & Bantul-the-Great.

This is a very different Narayan Debnath, both in style & humor. One is surprised by the range of his creations, and the various stylistic nuances that he seemed to have mastered. We also find that he tried many different characters, none surviving the indifference of the readers. 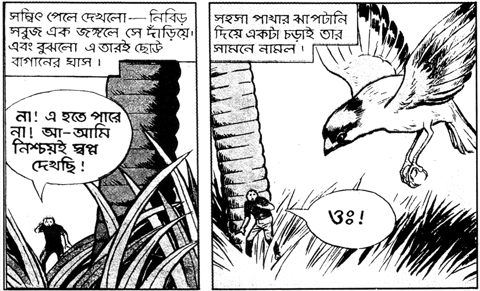 The most incredible of these characters has to be the man with the iron hand, Kaushik Ray. From what I have gathered so far, super agent Kaushik’s hand-like prosthetic can shoot bullets, darts, laser beams, spray deadly gas, can function as a knife as well as a transmitter (and the list is far from exhaustive). It’s a secret agent’s ultimate EDC.

A man without a past, Kaushik always ends up on the shores of remote tropical islands lorded by super villains who, like all super-villains, appear to be forever trapped, as it were, in their mirror-stages. They are either plotting the destruction of humanity, or merely developing path-breaking technologies to facilitate their petty smuggling operations.

I also find something incredibly poetic, even mythical, about the bionic hand, with the past & the possibilities that it hides. At once an excess & a lack, it adds a unique brand of solitude to this character and a potential darker side which could have been explored. All this could have made the super-agent a singular comic book hero. Yet the inherent simplicity of the plots & its less-than-compelling stories meant it got short shrift from the same readers who had embraced his more endearing creations in some pre-teen brats & an awkward suburban strongman.

5 Responses to “On the Shores of Pulp”

Thanks a lot :) The book was a delight!

Hahaha! reminds me of Ar undhati Roy's quote "It's not a real choice. It's an apparent choice. Like choosing a brand of detergent. Whether you buy Ivory Snow or Tide, they're both owned by Proctor & Gamble."